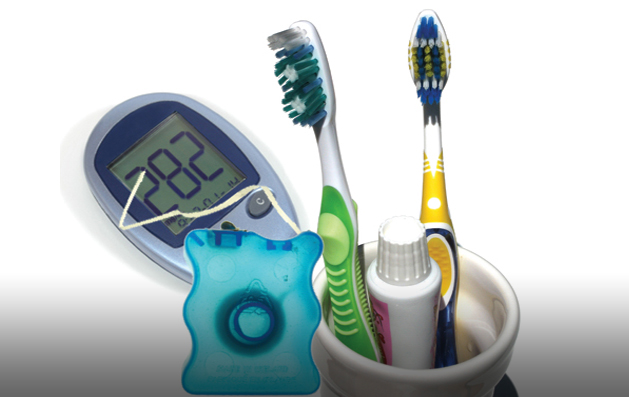 One of the primary objectives of the American Diabetes Association is to raise awareness and understanding of diabetes, its consequences, management and prevention.

Here are just a few of the recent statistics on diabetes:

The Toll on Health

Research shows that those with diabetes are at special risk for periodontal (gum) disease, adding serious gum disease to the list of other complications associated with diabetes, such as heart disease, stroke and kidney disease. Periodontal disease can lead to painful chewing difficulties and even tooth loss. Dry mouth, often a symptom of undetected diabetes, can cause soreness, ulcers, infections, and tooth decay. Smoking makes these problems worse.

People with diabetes are at an increased risk for serious gum disease because they are generally more susceptible to bacterial infection, and have a decreased ability to fight bacteria that invade the gums.

Other oral problems associated to diabetes include: thrush, an infection caused by fungus that grows in the mouth, and dry mouth which can cause soreness, ulcers, infections and cavities.

While plaque is the main culprit of gum disease, diabetes may weaken your mouth’s germ-fighting powers. High blood sugar levels can help the gum disease get worse. At the same time, gum disease can make diabetes harder to control.

Often gum disease is painless. You may not even know you have it until you have some serious damage. Regular dentist visits are your best weapon. While gum disease may not hurt, there are warning signs to watch for.

The Surgeon General’s Report on Oral Health states that good oral health is integral to general health. So whether you suffer from diabetes or not, be sure to brush and floss properly and see your dentist for regular checkups.

To read more about Oral Health and Hygiene for those with diabetes, visit the American Diabetes Association website.